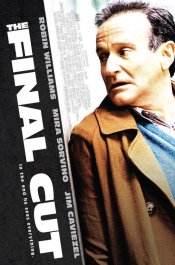 In a world where people are implanted with a chip that records their lives, one man has final cut on the recorded history of his clients. Alan Hackman is the best "cutter" in the business, his ability to grant the corrupt absolution of the sins of his clients, has put him in high demand. However, his talent for viewing life without emotion has shaped him into a cold distant man and has made him unable to experience life in the first person. He believes he is a "sin eater" and his work provides him with the ability to absolve the dead of their sins. While cutting a Rememory for a high-powered colleague, Alan discovers an image from his childhood that has haunted him his entire life. This discovery leads him on a high intensity search for truth and redemption.

Poll: Will you see The Final Cut?

Crew: Who's making The Final Cut

Production: What we know about The Final Cut

The Final Cut Release Date: When was it released?

The Final Cut was released in 2004 on Friday, October 15, 2004 (). There were 6 other movies released on the same date, including Hair Show, Eulogy and Being Julia.

Questions: Asked About The Final Cut

Looking for more information on The Final Cut?