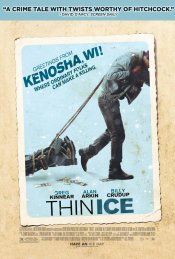 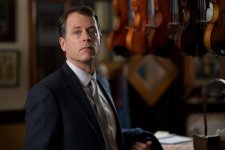 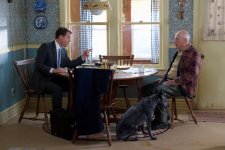 Mickey Prohaska (Greg Kinnear) is a small-time insurance agent looking for a way to jump-start his business, reunite with his estranged wife (Lea Thompson) and escape the frigid Wisconsin weather. This self-proclaimed master of spin believes that salesmanship is about selling a story -- all he needs is a sucker willing to buy it. He hits pay dirt with a lonely retired farmer (Alan Arkin) who is sitting on something much bigger than an insurance commission. But Mickey's attempt to con the old man spins out of control when a nosy, unstable locksmith (Billy Crudup) with a volatile temper dramatically ups the stakes, trapping him in a madcap spiral of danger, deceit and double-crossing.

Poll: Will you see Thin Ice?

A look at the Thin Ice behind-the-scenes crew and production team.

Production: What we know about Thin Ice

On or about September 16, 2009, the film was in Development status.

Thin Ice Release Date: When was it released?

Thin Ice was released in 2012 on Friday, February 17, 2012 (Limited release). There were 8 other movies released on the same date, including The Secret World of Arrietty, Ghost Rider: Spirit of Vengeance and This Means War.