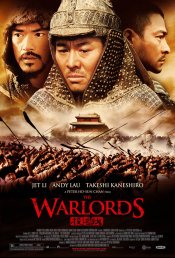 Set in the midst of war and political upheaval during the Taiping Rebellion of the 1860s, "Warlords" stars Jet Li as General Pang, who barely survives a brutal massacre of his fellow soldiers by playing dead, and joins a band of bandits led by Er Hu (Andy Lau) and Wu Yang (Takeshi Kaneshiro). After fighting back attackers from an helpless village, the three men take an oath to become blood brothers, pledging loyalty to one another until death, but things quickly turn sour and the three men become embroiled in a web of political deceit, and a love triangle between Pang, Er Hu and a beautiful courtesan (Wu Jing-Lei).

Poll: Will you see Warlords?

Production: What we know about Warlords

Warlords Release Date: When was it released?

Warlords was released in 2010 on Friday, April 2, 2010 (in 3 theaters . There were 4 other movies released on the same date, including Tyler Perry's Why Did I Get Married Too, Clash of the Titans and The Greatest.

Looking for more information on Warlords?