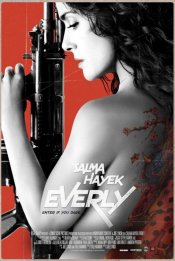 Follows a down-on-her-luck woman stuck in her apartment, fending off waves of assassins sent by her ex, a dangerous mob boss.

Poll: Will you see Everly?

Production: What we know about Everly

Everly Release Date: When was it released?

Everly was released in 2015 on Friday, February 27, 2015 (Limited release). There were 7 other movies released on the same date, including The Lazarus Effect, Focus and '71.

Looking for more information on Everly?