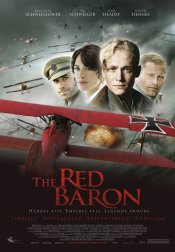 Baron Manfred von Richthofen is the most feared and celebrated pilot of the German air force in World War I, but after falling in love with the nurse Käte, Manfred realizes he is used only for propaganda means.

Poll: Will you see The Red Baron?

Crew: Who's making The Red Baron

A look at the The Red Baron behind-the-scenes crew and production team.

Production: What we know about The Red Baron

The Red Baron Release Date: When was it released?

The Red Baron was released in 2010 on Friday, March 19, 2010 (in 8 theaters . There were 11 other movies released on the same date, including Diary of a Wimpy Kid, Repo Men and The Bounty Hunter.

Questions: Asked About The Red Baron

Looking for more information on The Red Baron?