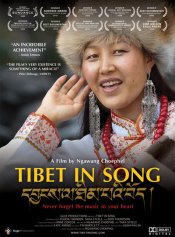 Director Ngawang Choephel, traveled to Tibet in 1995 to make a documentary about Tibetan folk music threatened by the Chinese occupation. While there, he was accused of being a spy by the Chinese and imprisoned for an 18-year sentence, of which he served seven years before he was released under international pressure.

Poll: Will you see Tibet in Song?

A look at the Tibet in Song behind-the-scenes crew and production team.

Production: What we know about Tibet in Song?

Tibet in Song Release Date: When was the film released?

Tibet in Song was released in 2010 on Friday, September 24, 2010 (in 1 theater . There were 8 other movies released on the same date, including You Again, Wall Street: Money Never Sleeps and Legend of the Guardians: The Owls of Ga'Hoole.

Q&A Asked about Tibet in Song

Looking for more information on Tibet in Song?