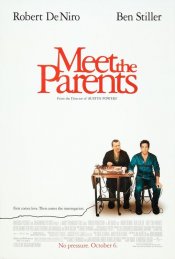 Male nurse Greg Focker (Ben Stiller) is all set to propose to his girlfriend, Pam (Teri Polo), during a weekend at her parents' home. But there's a catch: Jack Byrnes (Robert De Niro), Pam's intimidating, cat-loving, ex-CIA father, takes an immediate dislike to his daughter's truth-bending beau. Soon, a hilarious string of outrageous mishaps turns Greg into a master of relative disaster

Poll: Will you see Meet the Parents?

"I Am Chippendales" , "Madagascar 3: Europe's Most Wanted"

"House of Gucci" , "The War with Grandpa"

Production: What we know about Meet the Parents?

Meet the Parents Release Date: When was the film released?

Q&A Asked about Meet the Parents

Looking for more information on Meet the Parents?