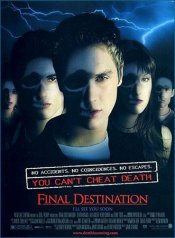 His entire high-school class is going to Paris, but Alex Browning (Devon Sawa) can't seem to shake his fear of flying. Once aboard the plane, he has a violently disruptive premonition which gets him and five of his classmates including Clear Rivers (Ali Larter) and Carter Horton (Kerr Smith) kicked off the plane. As the students watch the plane depart, they witness the horrifyling disaster that proves the deadly premonition true. Now having dodged death once, the terror begins in full as fate hunts them down one-by-one. Soon the five survivors will discover you can't cheat death.

Poll: Will you see Final Destination?

Production: What we know about Final Destination?

Final Destination Release Date: When was the film released?