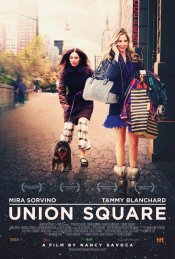 Lucy (Mira Sorvino) attempts to shop for discount clothes while anxiously talking on her cell. When the news is not what she wants to hear, she has a complete meltdown. Unsure of her next move, she has an idea. Suddenly, Lucy finds herself somewhere she's never been: her younger sister Jenny's (Tammy Blanchard) loft apartment off Union Square. Jenny is stunned to see Lucy on her doorstep and, what's worse, unable to keep her out. Jenny has little time to prepare her fiance, who she's kept in the dark about her family's tumultuous upbringing in the Bronx, for her sister's excessive behavior. Lucy tries to update Jenny about their mother and when the news is not what Jenny expects to hear, she's left wondering just what else could possibly happen to disrupt her ordered life...that is, until Lucy delivers even more surprises.

Poll: Will you see Union Square?

Production: What we know about Union Square

On or about September 27, 2011, the film was in Post-Production status.

Union Square Release Date: When was it released?

Union Square was released in 2012 on Friday, July 13, 2012 (Limited release). There were 6 other movies released on the same date, including Ice Age: Continental Drift, Red Lights and Ballplayer: Pelotero.