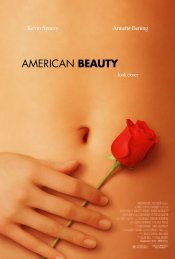 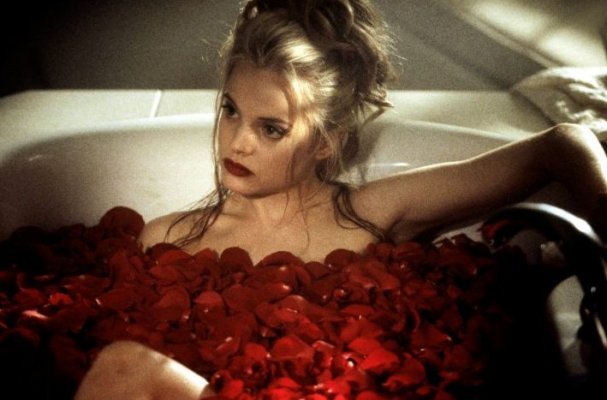 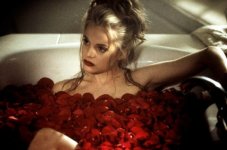 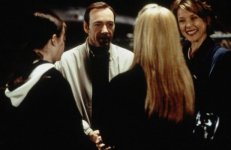 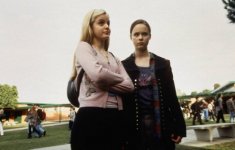 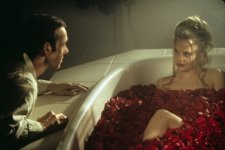 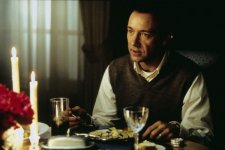 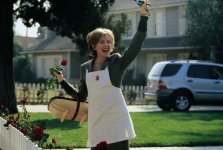 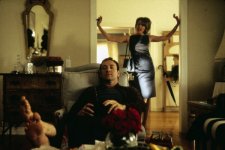 Spacey plays Lester Burnham, a man in his mid-40s going through an intense midlife crisis; he's grown cynical and is convinced that he has no reason to go on. Lester's relationship with his wife Carolyn (Annette Bening) is not a warm one; while on the surface Carolyn strives to present the image that she's in full control of her life, inside she feels empty and desperate. Their teenage daughter Jane (Thora Birch) is constantly depressed, lacking in self-esteem, and convinced that she's unattractive. Her problems aren't helped by her best friend Angela (Mena Suvari), an aspiring model who is quite beautiful and believes that that alone makes her a worthwhile person. Jane isn't the only one who has noticed that Angela is attractive: Lester has fallen into uncontrollable lust for her, and she becomes part of his drastic plan to change his body and change his life. Meanwhile, next door, Colonel Fitts (Chris Cooper) has spent a lifetime in the Marine Corps and can understand and tolerate no other way of life, which makes life difficult for his son Ricky (Wes Bentley), an aspiring filmmaker and part-time drug dealer who is obsessed with beauty, wherever and whatever it may be.

Poll: Will you see American Beauty?

A look at the American Beauty behind-the-scenes crew and production team.

Production: What we know about American Beauty

American Beauty Release Date: When was it released?