Is Justice Being Served? 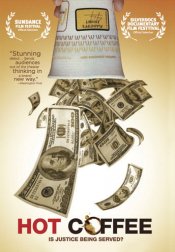 Focuses on ways corporations have used memories of seemingly outlandish legal verdicts, such as a million dollar judgment for a woman who spilled McDonald's hot coffee on herself, to promote tort reforms and to avoid jury trials through arbitration on cases that have merit.

Poll: Will you see Hot Coffee?

A look at the Hot Coffee behind-the-scenes crew and production team.

Production: What we know about Hot Coffee

Hot Coffee Release Date: When was it released?