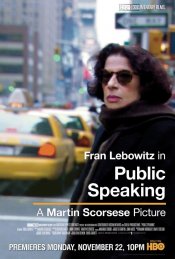 Features Fran Lebowitz expressing insights on social issues in an onstage discussion with longtime friend Toni Morrison, and on the streets of New York.

Poll: Will you see Public Speaking?

Production: What we know about Public Speaking

Public Speaking Release Date: When was it released?