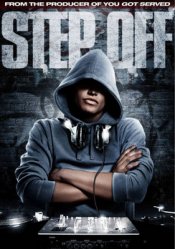 Set in Atlanta’s hip-hop underground scene, Rippa (Conrad Clifton), a struggling music producer working on his latest tracks for a regional beat battle, loses everything after a robbery. While lying low, he is forced to get back to the music and prove he has real talent. With the help of his friends, he’ll devise a mix to bring down the house and get him closer to being the beat battle champion.

Poll: Will you see Step Off?

Crew: Who's making Step Off

A look at the Step Off behind-the-scenes crew and production team. The film's director Laron Austin last directed Blackhats.

Production: What we know about Step Off

Step Off Release Date: When was it released?

Questions: Asked About Step Off

Looking for more information on Step Off?