Elvis has entered the White House. 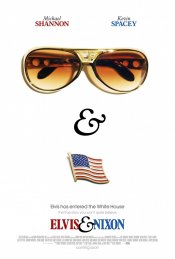 On a December morning in 1970, the King of Rock ’n Roll showed up on the lawn of the White House to request a meeting with the most powerful man in the world, President Nixon. Starring Academy Award nominee Michael Shannon as Elvis Presley and two-time Academy Award® winner Kevin Spacey as Richard Nixon, comes the untold true story behind this revealing, yet humorous moment in the Oval Office forever immortalized in the most requested photograph in the National Archives.

Poll: Will you see Elvis & Nixon?

Production: What we know about Elvis & Nixon

Elvis & Nixon Release Date: When was it released?

Elvis & Nixon was released in 2016 on Friday, April 22, 2016 (Limited release). There were 8 other movies released on the same date, including The Huntsman: Winter's War, Compadres and Precious Cargo.