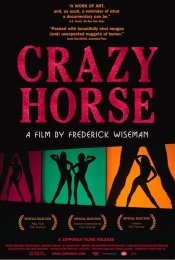 A documentary that looks behind the curtain on Le Crazy Horse de Paris, a landmark that has prided itself as "the best nude dancing show in the world" since 1951.

Poll: Will you see Crazy Horse?

Production: What we know about Crazy Horse

Crazy Horse Release Date: When was it released?

Crazy Horse was released in 2012 on Wednesday, January 18, 2012 (in 1 theater . There were 1 other movie released on the same date, including The City Dark.