The Salt of Life Movie 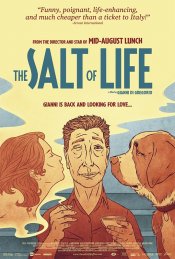 In The Salt of Life, Gianni Di Gianni plays a middle-aged retiree who has become invisible to all distaff Romans, regardless of age or relation. He contends with an aristocratic, spendthrift mother (played by Valeria de Franciscis); a wife who is more patronizing friend than romantic partner; a daughter (played by Di Gregorio's daughter Teresa) with a slacker boyfriend whom Gianni unwillingly befriends; and a wild young neighbor who sees him merely as her dog walker. Watching his "codger" friends snare beautiful younger women on the sun-kissed cobblestones of Trastevere, Gianni tries his polite, utterly gracious best to generate some kind of extracurricular love life--with both hilarious and poignant results.

Poll: Will you see The Salt of Life?

Crew: Who's making The Salt of Life

The Salt of Life Trailers & Videos

Production: What we know about The Salt of Life

The Salt of Life Release Date: When was it released?

The Salt of Life was released in 2012 on Friday, March 2, 2012 (New York release). There were 9 other movies released on the same date, including Dr. Seuss' The Lorax, Project X and The Snowtown Murders.

Questions: Asked About The Salt of Life

Looking for more information on The Salt of Life?