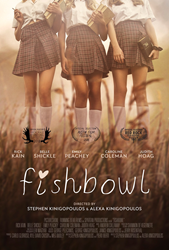 In Bishop, a small town filled with secrets, where the Simon sisters are trying to cope with their mother's absence and maintain a normal life while enduring Catholic school and typical teen struggles under the watchful eye of their demanding counselor Mr. Barnes. Silently and firmly repressing them is their damaged father who, quite adrift himself, is growing increasingly obsessed with The Rapture that he believes is imminent. Through rebellious acts, punishments, and religious impulses, home is anything but a refuge, and the sisters must cling to one another to survive. On the night that Rick believes to be The Rapture, he will attempt to take his daughters to "the other side" but as the bell tolls, true colors shine through and the mystery of their mother's disappearance is revealed to her daughters in a shattering climax.