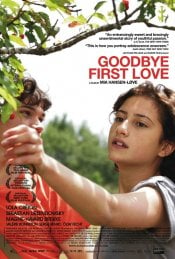 Fifteen-year-old Camille (Lola Creton) is a serious girl who has fallen in love with the cheerful Sullivan (Sebastian Urzendowsky), an older boy who returns her feelings, mostly, but wants to be free to explore the world. When he leaves her to travel, she is devastated, but develops over the following years, into a more fully formed woman, with new interests and a new love - and the possibility that she'll be less defenseless when Sullivan enters her life again.

Production: What we know about Goodbye First Love

Goodbye First Love Release Date: When was it released?

Goodbye First Love was released in 2012 on Friday, April 20, 2012 (in 4 theaters . There were 10 other movies released on the same date, including Chimpanzee, The Lucky One and Think Like a Man.