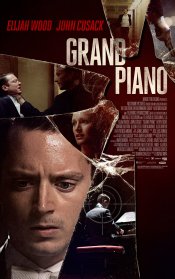 Tom Selznick, the most talented pianist of his generation, stopped performing in public because of his stage fright. Years after a catastrophic performance, he reappears in public in a long awaited concert in Chicago. In a packed theater, in front of the expectant audience, Tom finds a message written on the score: “Play one wrong note and you die”. Without leaving the piano, Tom must discover the anonymous sniper’s motives and look for help without anyone realizing…

Poll: Will you see Grand Piano?

Happy Feet Two, The Hobbit: The Battle of the Five Armies

The Look of Love, Chalet Girl

Production: What we know about Grand Piano?

Grand Piano Release Date: When was the film released?

Grand Piano was released in 2014 on Friday, March 7, 2014 (Limited release). There were 11 other movies released on the same date, including Mr. Peabody & Sherman, 300: Rise of An Empire and Journey to the West.