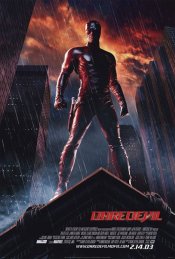 Based on the popular Marvel Comics character, this is the story of Matt Murdock, son of a boxer who gets killed by petty criminals for refusing to take a dive. This drives young Matt to fight crime, despite a childhood accident that robbed him of his sight. That same accident, however, also granted him exceptionally advanced senses of hearing, touch, taste and smell, as well as providing him with a strange sort of mental radar that helps to compensate for his lack of vision. After training hard in the martial arts, as well as excelling in law school, Murdock becomes a lawyer by day and a vigilante calling himself Daredevil by night.

Poll: Will you see Daredevil?

Production: What we know about Daredevil?

Daredevil Release Date: When was the film released?

Daredevil was released in 2003 on Friday, February 14, 2003 (). There were 5 other movies released on the same date, including Lockdown, All The Real Girls and He Loves Me, He Loves Me Not.

Looking for more information on Daredevil?