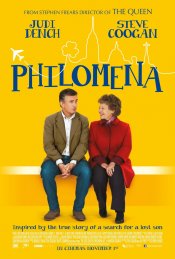 A woman searches for her adult son, who taken away from her decades ago when she was forced to live in a convent.

Poll: Will you see Philomena?

Production: What we know about Philomena

On or about September 30, 2012, the film was in Pre-Production status.

The pic will shoot in late October 2012.

Philomena Release Date: When was it released?

Philomena was released in 2013 on Friday, November 22, 2013 (New York / Los Angeles release). There were 4 other movies released on the same date, including The Hunger Games: Catching Fire, The Delivery Man and The Christmas Candle.

Looking for more information on Philomena?