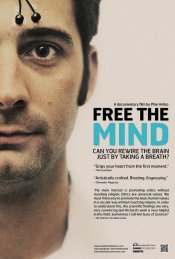 In 1992 Professor Richard Davidson, one of the world’s leading neuroscientists, met the Dalai Lama, who encouraged him to apply the same rigorous methods he used to study depression and anxiety to the study of compassion and kindness, those qualities cultivated by Tibetan meditation practice. The results of Davidson’s studies at the Center for Investigating Healthy Minds at the University of Wisconsin, Madison, are portrayed in Free the Mind as they are applied to treating PTSD in returning Iraqi vets and children with ADHD. The film poses two fundamental questions: What really is consciousness, and how does it manifest in the brain and body? And is it possible to physically change the brain solely through mental practices?

Poll: Will you see Free the Mind?

A look at the Free the Mind behind-the-scenes crew and production team.

Production: What we know about Free the Mind?

Free the Mind Release Date: When was the film released?

Free the Mind was released in 2013 on Friday, May 3, 2013 (Limited release). There were 16 other movies released on the same date, including Iron Man 3, The Iceman and Caroline and Jackie.

Q&A Asked about Free the Mind

Looking for more information on Free the Mind?