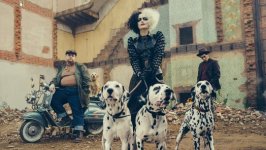 Poll: Will you see Cruella?

A look at the Cruella behind-the-scenes crew and production team. The film's director Craig Gillespie last directed I, Tonya and The Finest Hours. The film's writer Aline Brosh McKenna last wrote I Don't Know How She Does It and Morning Glory.

Production: What we know about Cruella

On or about December 5, 2018, the film was in Pre-Production status.

On or about September 22, 2016, the film was in Pre-Production status.

Plan is to get the film into production by the end of the year.

Scribe Aline Brosh McKenna (Cinderalla) has been hired to pen a film based on the dog-fur-loving fashionista from 101 Dalmatians.

Cruella Release Date: When is it coming out?

Cruella is coming out in 2021 on Friday, May 28, 2021 (Nationwide release). There is 1 other movie coming out on the same date, including Infinite.

Looking for more information on Cruella?