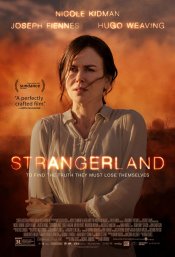 When Catherine (Nicole Kidman) and Matthew Parker’s (Joseph Fiennes) two teenage children suddenly vanish in a dust storm, the couple’s relationship is pushed to the brink as they confront the mystery of their children’s disappearance in the soaring desert heat. Also stars Hugo Weaving.

Poll: Will you see Strangerland?

A look at the Strangerland behind-the-scenes crew and production team. The film's director Kim Farrant last directed Angel of Mine.

Production: What we know about Strangerland

Production is tentatively set to begin in March 2014.

Strangerland Release Date: When was it released?

Strangerland was released in 2015 on Friday, July 10, 2015 (Limited release). There were 9 other movies released on the same date, including Self/Less, Minions and The Gallows.

Looking for more information on Strangerland?