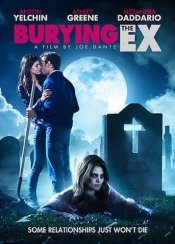 It seemed like a great idea when Max, an all-around nice guy (Anton Yelchin, Star Trek), and Evelyn, his beautiful girlfriend (Ashley Greene, Twilight Saga), moved in together. When Evelyn turns out to be a controlling, manipulative nightmare, Max knows it’s time to call it quits, but there’s just one problem: he’s terrified of breaking up with her. Fate steps in when Evelyn is involved in a freak accident and dies, leaving Max single and ready to mingle. Just as Max is thinking about moving on with what could be his dream girl, Olivia (Alexandra Daddario, True Detective) – Evelyn has returned from the grave and is determined to get her boyfriend back...even if that means transforming him into one of the undead.

Poll: Will you see Burying the Ex?

Crew: Who's making Burying the Ex

A look at the Burying the Ex behind-the-scenes crew and production team. The film's director Joe Dante last directed Nightmare Cinema and The Hole 3D.

Production: What we know about Burying the Ex

Burying the Ex Release Date: When was it released?

Burying the Ex was released in 2015 on Friday, June 19, 2015 (Limited release). There were 7 other movies released on the same date, including Inside Out, Dope and Infinitely Polar Bear.

Questions: Asked About Burying the Ex

Looking for more information on Burying the Ex?