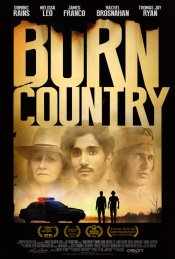 An Afghan journalist is exiled from his war-torn country to a small bohemian community in Northern California. When he attempts to turn his menial job on the local police blotter into "Afghan-style" coverage of local crime, he gets drawn into the backwoods of this small town — a shadow Northern California where sex is casual, true friendship is hard to come by and an unfamiliar form of violence lurks all around.

Poll: Will you see Burn Country?

"The Courier" , "Spies in Disguise"

A look at the Burn Country behind-the-scenes crew and production team.

Production: What we know about Burn Country?

Burn Country Release Date: When was the film released?

Burn Country was released in 2016 on Friday, December 9, 2016 (Limited release). There were 14 other movies released on the same date, including Office Christmas Party, Miss Sloane and Nocturnal Animals.