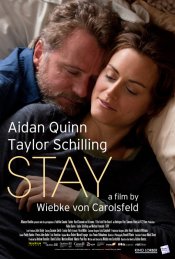 Taylor Schilling and Aidan Quinn deliver performances as Abbey and Dermot, a couple struggling to find their way in life. After retreating to the rugged expanse of the Irish countryside, their happy existence is upended when Abbey discovers she’s pregnant. Dermot, a long-since disgraced professor, has no interest in being a father. With their lives now at a crossroads, Abbey and Dermot’s relationship hangs in the balance. They must both face the truth of who they are and which path in life to take that will finally lead them home.

Poll: Will you see Stay?

A look at the Stay behind-the-scenes crew and production team.

Production: What we know about Stay

Stay Release Date: When was it released?

Stay was released in 2014 on Friday, March 21, 2014 (Limited release). There were 13 other movies released on the same date, including Muppets Most Wanted, Divergent and Nymphomaniac: Part One.

Looking for more information on Stay?