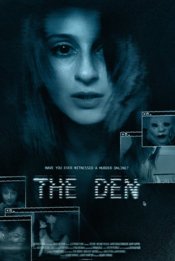 While the police dismiss it as a viral prank, Elizabeth believes what she saw is real and takes it upon herself to find the truth. Her life quickly spirals out of control as she gets pulled deeper into the darkest recesses of the internet. And eventually, Elizabeth finds herself trapped in a twisted game in which she and her loved ones are targeted for the same grisly fate as the first victim.

Poll: Will you see The Den?

A look at the The Den behind-the-scenes crew and production team.

Production: What we know about The Den?

The Den Release Date: When was the film released?

The Den was released in 2014 on Friday, March 14, 2014 (Limited release). There were 14 other movies released on the same date, including Need for Speed, Tyler Perry's Single Moms Club and Bad Words.

Q&A Asked about The Den

Looking for more information on The Den?