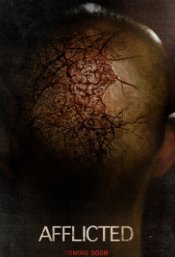 February 18, 2014 • Awaiting release by distributor; release date not yet announced.

Best Friends Derek and Clif set out on a trip of lifetime. Their plan – travel to the ends of the earth, see the world, and live life to the fullest. But the trip soon takes a dark and bloody turn. Just days in, one of the men shows signs of a mysterious affliction which gradually takes over his entire body and being. Now, thousands of miles from home, in a foreign land, they must race to uncover the source before it consumes him completely. Footage meant to be travel memories may now become evidence of one of the most shocking discoveries ever captured on film…and perhaps will be their only postcard home.

Poll: Will you see Afflicted?

Production: What we know about Afflicted

Afflicted Release Date: When is it coming out?

Afflicted is coming out To Be Announced (TBA).

Looking for more information on Afflicted?