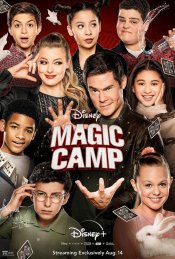 Follows Andy (Devine), who at the urging of his former mentor and Magic Camp owner Roy Preston (Tambor) returns as a counselor to the camp of his youth hoping to reignite his career. Instead he finds inspiration in his ragtag bunk of rookie magicians.

Poll: Will you see Magic Camp?

The Invention of Lying, My Boss's Daughter

The Contractor, The Seven Faces of Jane

A look at the Magic Camp behind-the-scenes crew and production team. The film's writer Steve Martin last wrote The Pink Panther and Shopgirl.

Production: What we know about Magic Camp?

Magic Camp Release Date: When was the film released?


Magic Camp was a Disney+ release in 2020 on Friday, August 14, 2020. There were 9 other movies released on the same date, including The Silencing, Spree and Sputnik .