We Come As Friends Movie 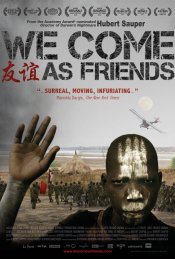 A modern odyssey – a dizzying, almost science fiction-like journey into the heart of Africa. At the moment when the Sudan, the continent’s biggest country, is being divided into two nations, an old “civilizing” ideology re-emerges – one of colonialism and a clash of empires – with new episodes of bloody (and holy) wars over land and resources. Academy Award® nominated director of Darwin’s Nightmare, Hubert Sauper, takes us on a voyage in his tiny, self-made aircraft constructed from tin and canvas, leading us into the most improbable locations and into people’s thoughts and dreams in both stunning and heartbreaking ways.

Poll: Will you see We Come As Friends?

Crew: Who's making We Come As Friends

A look at the We Come As Friends behind-the-scenes crew and production team.

We Come As Friends Trailers & Videos

Production: What we know about We Come As Friends

We Come As Friends Release Date: When was it released?

We Come As Friends was released in 2015 on Friday, August 14, 2015 (New York release). There were 13 other movies released on the same date, including Return to Sender, The Man From U.N.C.L.E and Straight Outta Compton.

Questions: Asked About We Come As Friends

Looking for more information on We Come As Friends?