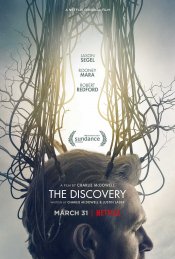 In the near future, the world is off-balance. People have gained a specific knowledge, and death has lost meaning, due to a breakthrough scientific discovery by Dr. Thomas Harbor (Robert Redford): There is now definitive proof of an afterlife. While countless people have chosen suicide in order to "re-set" their existence, others go on, trying to decide what it all means. Among them is Dr. Harbor's son Will (Jason Segel), who has arrived at his father's isolated compound with a mysterious young woman named Isla (Rooney Mara). There, they discover the strange acolytes who help Dr. Harbor with his experiments. They are all looking to Dr. Harbor for meaning. Can Will and Isla find peace - in this place, or on the other side?

Poll: Will you see The Discovery?

Crew: Who's making The Discovery

A look at the The Discovery behind-the-scenes crew and production team. The film's director Charlie McDowell last directed The One I Love and Patience.

Production: What we know about The Discovery

The Discovery Release Date: When was it released?

The Discovery was released in 2017 on Friday, March 31, 2017 (New York / Los Angeles release). There were 11 other movies released on the same date, including The Boss Baby, Ghost in the Shell and The Zookeeper's Wife. Netflix Too!

Questions: Asked About The Discovery

Looking for more information on The Discovery?