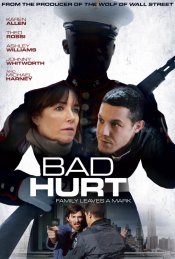 Life for the Kendalls has been burdened by grief and claustrophobia. Faced with caring for one child with special needs and another with PTSD, the family struggles for a sense of stability at home in their Staten Island, NY hamlet. When a secret from the past is revealed, it threatens to tear them apart.

Poll: Will you see Bad Hurt?

"Raiders of the Lost Ark" , "Indiana Jones and the Kingdom of the Crystal Skull"

"A Most Violent Year"

A look at the Bad Hurt behind-the-scenes crew and production team.

Production: What we know about Bad Hurt?

Bad Hurt Release Date: When was the film released?

Bad Hurt was released in 2016 on Friday, February 12, 2016 (Limited release). There were 15 other movies released on the same date, including Deadpool, How to be Single and Zoolander 2.