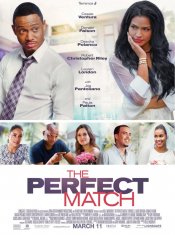 Terrence J. stars as Charlie, a playboy who's convinced that relationships are dead. His two best friends Rick and Victor, played by Donald Faison and Robert C. Riley, bet him that if he sticks to one woman for one month, he's bound to get attached. Charlie denies this until he crosses paths with the beautiful and mysterious Eva, played by singer/actress Cassie. They may agree to a casual affair, but eventually Charlie is questioning whether he may actually want more.

Poll: Will you see The Perfect Match?

"In the Heights" , "Gimme Shelter"

A look at the The Perfect Match behind-the-scenes crew and production team. The film's director Bille Woodruff last directed Honey and Bring It On: Fight to the Finish.

Production: What we know about The Perfect Match?

The Perfect Match Release Date: When was the film released?

The Perfect Match was released in 2016 on Friday, March 11, 2016 (Limited release). There were 21 other movies released on the same date, including The Brothers Grimsby, 10 Cloverfield Lane and The Young Messiah.

Q&A Asked about The Perfect Match

Looking for more information on The Perfect Match?