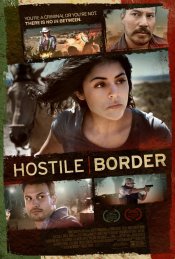 Raised in the U.S., Claudia (22) is an undocumented immigrant living beyond her means in a twisted version of the American dream. When she’s arrested by the FBI for credit card fraud, Claudia is quickly deported to México. Speaking no Spanish and lost in her foreign “homeland,” she reluctantly takes refuge at her estranged father's cattle ranch. As she clashes with her unyielding father, her attempts to return home to the U.S. thrust her into a dangerous bond with a foreign smuggler, Ricky. Caught between her father’s sermons, Ricky's promises, and the encroaching military, Claudia must navigate a tightrope of impossible choices.

Poll: Will you see Hostile Border?

"All She Can" , "The Three Burials of Melquiades Estrada"

A look at the Hostile Border behind-the-scenes crew and production team.

Production: What we know about Hostile Border?

Hostile Border Release Date: When was the film released?

Hostile Border was released in 2016 on Friday, April 15, 2016 (Limited release). There were 13 other movies released on the same date, including The Jungle Book, Barbershop: The Next Cut and Everybody Wants Some.