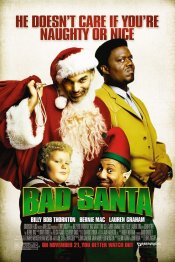 This is the story of two criminals who disguise themselves as Santa Claus (Billy Bob Thornton) and his elf, traveling across the country to major malls, using the good will people have towards Santa to rob the stores blind. The plan is going great until the two baddies meet an introverted 8-year-old boy who reminds them of the true meaning of Christmas.

Poll: Will you see Bad Santa?

Max, Middle School: The Worst Years of My Life

I Can Only Imagine, The Stupidest Angel

Production: What we know about Bad Santa?

Bad Santa Release Date: When was the film released?

Bad Santa was released in 2003 on Wednesday, November 26, 2003 (). There were 3 other movies released on the same date, including In America, Timeline and The Haunted Mansion.