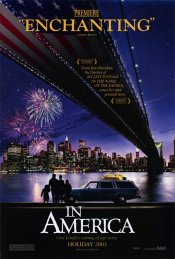 With their two young daughters in tow, Johnny and Sarah emigrate from Ireland to New York City in pursuit of a dream. The family uses ingenuity and sheer strength of will to make the most of their new life. Ultimately it is their kindness to a stranger and that stranger's response in return that builds their new home.

Poll: Will you see In America?

Crew: Who's making In America

Production: What we know about In America

In America Release Date: When was it released?

In America was released in 2003 on Wednesday, November 26, 2003 (). There were 3 other movies released on the same date, including Bad Santa, The Haunted Mansion and Timeline.

Questions: Asked About In America

Looking for more information on In America?