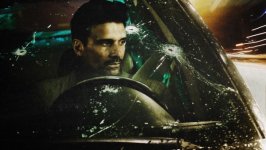 A getaway driver is thrust into a high stakes race-to-survive after a bank robbery goes terribly wrong. With a car full of money and his family on the line, the clock is ticking to figure out who double-crossed him, and the only person he can trust is his 14-year-old daughter.

Poll: Will you see Wheelman?

A look at the Wheelman behind-the-scenes crew and production team.

Production: What we know about Wheelman

Shooting set to start in September 2016.

Wheelman Release Date: When was it released?

Wheelman was released in 2017 on Friday, October 20, 2017 (Netflix release). There were 13 other movies released on the same date, including Geostorm, The Snowman and Boo! 2: A Madea Halloween.

Looking for more information on Wheelman?