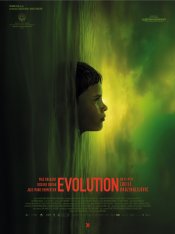 Ten-year-old Nicolas (Max Brebant) lives in a remote seaside village populated only by boys his age and adult women. But when he makes a disturbing discovery beneath the ocean waves—a dead boy with a red starfish on his stomach—Nicolas begins to question everything about his existence. What are the half-remembered images he recalls, as if from another life? If the woman he lives with is not his mother, then who is she? And what awaits the boys when they are all suddenly confined to a hospital?

Poll: Will you see Evolution?

A look at the Evolution behind-the-scenes crew and production team.

Production: What we know about Evolution?

Evolution Release Date: When was the film released?

Evolution was released in 2016 on Friday, November 25, 2016 (Limited release). There were 2 other movies released on the same date, including Miss Sloane and Lion.

Looking for more information on Evolution?