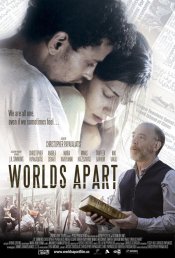 Set in modern day Greece, Worlds Apart is comprised of three separate narratives each following a love story between a foreigner and a Greek. Each story represents a different generation falling in love during a time of socioeconomic turmoil that dominates Southern Europe as a whole, only to connect as a single story in the end. Almost like a triptych work of art where each painting stands alone, yet its true impact lies when viewed as a whole.

Poll: Will you see Worlds Apart?

A look at the Worlds Apart behind-the-scenes crew and production team.

Production: What we know about Worlds Apart

Worlds Apart Release Date: When was it released?

Worlds Apart was released in 2017 on Friday, January 13, 2017 (Limited release). There were 16 other movies released on the same date, including Sleepless, Monster Trucks and The Bye Bye Man.