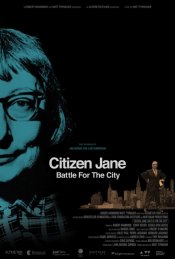 Citizen Jane: Battle for the City is a story about our global urban future, in which nearly three-fourths of the world’s population will live in cities by the end of this century. It’s also a story about America’s recent urban past, in which bureaucratic, “top down” approaches to building cities have dramatically clashed with grassroots, “bottom up” approaches. The film brings us back mid-century, on the eve of the battles for the heart and soul of American cities, about to be routed by cataclysmically destructive Urban Renewal and highway projects.

The film details the revolutionary thinking of Jane Jacobs, and the origins of her magisterial 1961 treatise The Death and Life of Great American Cities, in which she singlehandedly undercuts her era’s orthodox model of city planning, exemplified by the massive Urban Renewal projects of New York’s “Master Builder,” Robert Moses. Jacobs and Moses figure centrally in our story as archetypes of the “bottom up” and the “top down” vision for cities.

They also figure as two larger-than-life personalities: Jacobs—a journalist with provincial origins, no formal training in city planning, and scarce institutional authority—seems at first glance to share little in common with Robert Moses, the upper class, high prince of government and urban theory fully ensconced in New York’s halls of power and privilege. Yet both reveal themselves to be master tacticians who, in the middle of the 20th century, became locked in an epic struggle over the fate of the city.

Poll: Will you see Citizen Jane?

A look at the Citizen Jane behind-the-scenes crew and production team.

Production: What we know about Citizen Jane

Citizen Jane Release Date: When was it released?

Citizen Jane was released in 2017 on Friday, April 21, 2017 (Limited release). There were 14 other movies released on the same date, including Unforgettable, The Promise and Born in China.