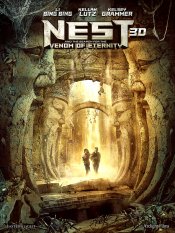 March 6, 2017 • Filming completed; editing of shot film; music composition and recordings, as well as sound and visual effects being added.

Follows a group of expert scientists who, on the cusp of the world’s greatest discovery, must out run – and out wit – a swarm of predatory Funnel Webs spiders that guard the labyrinth tomb of a once powerful Chinese Emperor.

Poll: Will you see Nest 3D?

A look at the Nest 3D behind-the-scenes crew and production team. The film's director Kimble Rendall last directed 7 Guardians of the Tomb and Bait 3D.

Production: What we know about Nest 3D

Nest 3D Release Date: When is it coming out?

Nest 3D is coming out To Be Announced (TBA).