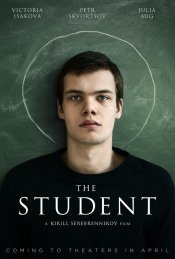 After Venya’s mother receives a call from school reporting her son’s refusal to participate in mixed swimming lessons, she first suspects her teenager of being shy and derides his claim that it is “against his religion.” As Venya is finally exempted by the school’s devout principal, he grows confident that his strict and rigorous study of the Bible gives him the ability to manipulate all forms of authority. Challenged by a teacher who refuses to consent to his dogma, he sets out to eliminate her and subdue an entire community. At a time when arguments over the teaching of religion in public schools are prominent in the media, this wildly escalating classroom drama—based on a play by German playwright Marius von Mayenburg—serves as a frightening cautionary tale.

Poll: Will you see The Student?

Crew: Who's making The Student

Under The Milky Way

Production: What we know about The Student

The Student Release Date: When was it released?

The Student was released in 2017 on Friday, April 21, 2017 (Limited release). There were 14 other movies released on the same date, including The Promise, Unforgettable and Phoenix Forgotten.

Questions: Asked About The Student

Looking for more information on The Student?