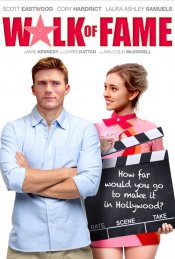 Stuck in a dead-end job with no girlfriend, Drew (Scott Eastwood) meets attractive flight attendant and aspiring actress Nikki (Laura Ashley Samuels) and decides to sign up for classes at the famous Star Academy in Hollywood. There Drew gets more than he bargained for when he encounters the eccentric and volatile acting coaches (Malcolm McDowell & Chris Kattan) along with a cast of crazy characters all looking for their big break in Tinsel Town. Does Drew have what it takes to survive the insanity of the Star Academy and win Nikki's heart?

Poll: Will you see Walk of Fame?

Crew: Who's making Walk of Fame

A look at the Walk of Fame behind-the-scenes crew and production team.

Production: What we know about Walk of Fame

Walk of Fame Release Date: When was it released?

Walk of Fame was released in 2017 on Friday, March 24, 2017 (Limited release). There were 12 other movies released on the same date, including CHiPs, Power Rangers and Life.

Questions: Asked About Walk of Fame

Looking for more information on Walk of Fame?