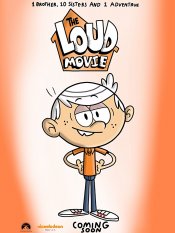 Based on the popular Nickelodeon TV series.

Lincoln Loud is an eleven-year-old boy who lives with ten sisters.

Comedy Family Animation Based on TV

Poll: Will you see The Loud House?

Crew: Who's making The Loud House

A look at the The Loud House behind-the-scenes crew and production team. The film's writer Billy Frolick last wrote Madagascar and Ollie.

Production: What we know about The Loud House

On or about February 8, 2019, the film was in Production status.

Paramount has pulled the Nickelodeon toon adaptation from its 2020 schedule.

The Loud House Release Date: When is it coming out?

Questions: Asked About The Loud House

Looking for more information on The Loud House?