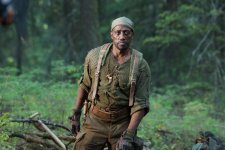 Follows five friends on vacation at a remote lake house, unaware that planet Earth is under an alien invasion and mass-abduction. Wesley Snipes plays a mysterious hunter with special knowledge of the attack.

Poll: Will you see The Recall?

Crew: Who's making The Recall

A look at the The Recall behind-the-scenes crew and production team.

Production: What we know about The Recall

The Recall Release Date: When was it released?

The Recall was released in 2017 on Friday, June 2, 2017 (Limited release). There were 17 other movies released on the same date, including Captain Underpants: The First Epic Movie, Wonder Woman and God of War.

Questions: Asked About The Recall

Looking for more information on The Recall?