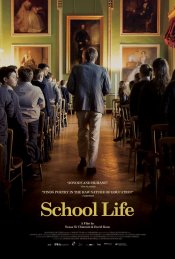 This observational documentary follows a year in the lives of two inspirational teachers at Headfort, the only primary-age boarding school in Ireland. Housed in an 18th century estate, school life embraces tradition and modernity. For John, rock music is just another subject alongside Maths, Scripture and Latin, taught in a collaborative and often hilarious fashion. For his wife Amanda, the key to connecting with children is the book, and she uses all means to snare the young minds. For nearly half a century these two have shaped thousands of minds, but now the unthinkable looms: what would retirement mean? What will keep them young if they leave?

Poll: Will you see School Life?

A look at the School Life behind-the-scenes crew and production team.

Production: What we know about School Life

School Life Release Date: When was it released?

School Life was released in 2017 on Friday, September 8, 2017 (Limited release). There were 13 other movies released on the same date, including IT, Home Again and Rememory.