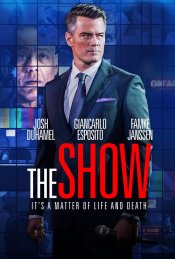 Concerns a reality show that exploits the on-camera deaths of its players — on live TV. After a dating show ends in violence, its host Adam Rogers (Duhamel) and a ratings-hungry network exec (Janssen) launch a terrifying new program that promises fresh kills every week. The tension mounts as a kindhearted janitor (Esposito) joins the deadly program, hoping to help his struggling family survive…at any cost

Poll: Will you see The Show?

Crew: Who's making The Show

Production: What we know about The Show

The Show Release Date: When was it released?

The Show was released in 2017 on Friday, September 15, 2017 (Limited release). There were 9 other movies released on the same date, including American Assassin, mother! and Infinity Chamber.

Questions: Asked About The Show

Approximately 19 minutes into the movie, a girl twirls a long, red ribbon. What is her name?

Looking for more information on The Show?