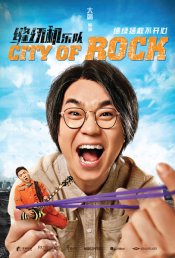 City of Rock follows Hu Liang, a young man from a small town in China, who wants to protect the town’s treasured Rock Park from redevelopment by a corporate real estate agent. Hoping to save the park by organizing a charity rock concert, he partners with music agent Cheng Gong. But when he’s offered a large payout to cancel the concert, will Hu Liang choose money or will he save the beloved town park?

Poll: Will you see City of Rock?

Crew: Who's making City of Rock

A look at the City of Rock behind-the-scenes crew and production team.

Production: What we know about City of Rock

City of Rock Release Date: When was it released?

City of Rock was released in 2017 on Friday, October 6, 2017 (Limited release). There were 19 other movies released on the same date, including The Mountain Between Us, Blade Runner 2049 and My Little Pony: The Movie.

Questions: Asked About City of Rock

Looking for more information on City of Rock?