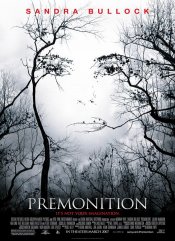 A Midwest housewife's husband dies in a car crash but appears alive the next day.

Linda Hanson has a beautiful house, a loving husband and two adorable daughters. Her life is perfect, until the day she receives the devastating news that her husband Jim has died in a car accident. When she wakes up the next morning to find him alive and well, she assumes it was all a dream, but is shaken by how vivid it felt. She soon realizes it wasn't a dream, and her world is turned upside down as the surreal circumstances lead her to discover that her perfect life may not have been all that it appeared. Desperate to save her family, Linda begins a furious race against time and fate to try and preserve everything that she and Jim have built together.

Poll: Will you see Premonition?

Production: What we know about Premonition

Premonition Release Date: When was it released?

Premonition was released in 2007 on Friday, March 16, 2007 (). There were 4 other movies released on the same date, including Shooter, Tortilla Heaven and I Think I Love My Wife.

Looking for more information on Premonition?